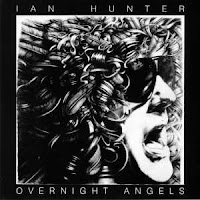 After receiving (and turning down) several offers in 1976, Ian realised he wanted to be in a band again. After the less than commercial success of Alien Boy, he went in to the studios wanting to record fast songs again (having recorded Alien Boy never wanting to do a fast song again!). With Roy Thomas Baker producing (he had produced several Queen albums), this should have been a monster.

The result could almost be described heavy metal - it is certainly not a typical Ian Hunter album. The rockers are certainly there, but the production is too thin - everything is at the same level in the mix (up front!), with Ian's voice almost drowned out at times.

Released when punk was at its height, the album and subsequent tour received mixed reviews. Columbia in the States was more forthright - they refused to release it (although a few test pressings exist). Ian would soon part company from CBS/Columbia and Fred Heller (his manager), and soon disowned the album, describing it as "that horrible album" and "a mistake", and hasn't played any track from it in concert since.
---------------------------------------------------

Brent CourseyApr 30, 2010
Stupidly, it seems the "hip" thing is to disdain this alblum. Why? A) Because Mick Ronson, Ian's soulmate/lead guitarist was, at the time, running around with Bobby Zimmerman (and let's be generous and forget he was also helping produce Johnny C. Mellonbrain's first album). So what did Ian do? He dipped into Bowie's bag of sidemen/guitarists, and retrieved Earl Slick, truly a guitarist worth of his last name. And B) the naysayers whine, "it's too overproduced." Well, DUH: production of OA was courtesy of Roy Thomas Baker, who was concurrently producing - QUEEN. And, as we all know, the late, great, sorely-missed Fred and company were fond of being excessive in...a LOT of things, not just music.

I was suggested this blog by my cousin. I am not
sure whether this post is written by him as nobody else know such detailed about my trouble.

Please give me the password to uncompact the rar file. Thank you so mach in advance.

Pass 4 the rar is mentioned on the page were you found the download brother -;)