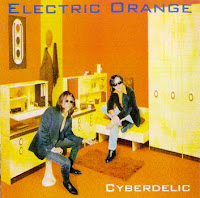 Honestly, after having heard the excellent "Krautrock From Hell" when I happened to pick up this album I have to admit that I've almost skipped it entriely. Apparently this is just chill-out music, of the kind that is useful after a rave while one is waitng for the ecstasy taken to go down. I have never taken ecstasy but this is how somebody explained me that it works.

The album is full of this, effectively, but after quite a long time I have listened to it again, only because I have copied all my Electric Orange stuff on an mp3 reader and, know what? I have liked it!

Yes, it's borderline with the chill-out music, most of the tracks are good for the Buddah-bar but it contains a lot of good kraut, especially in tracks like "Mother's Cake" which is very close to CAN, or the unusual Indo/Raga of "Tartisma Zemini" which was very in advance with its time as indo music mixed with disco drones appeared and became a successful mainstream thing not less than 10 years after the album's release.

The album has much elements of what we use to call Krautrock. One for all, the stunning distorted guitar which cries in the background on some trakcs, barely hidden by a bass and drum base.

Probably, should this have been their only release, this band wouldn't be on PA, but this album even if borderline with chill-out music is borderline with krautrock as well and if somebody has enjoyed the disco-kraut of Kraftwerk in the 80s (and I'm not one of those) why not enjoying this as well?

Non essential and barely prog, but this is a good album. In my case, listening to it carefully with headphones on, respect of just as background, has made the difference.