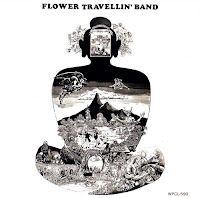 This was Japan’s premier hard rock group. They recorded several albums during the late 60’s and early 70’s though Satori and Made In Japan are their very best works. Satori is one of hard rock’s great lost records that finds common ground with Monster Movie era Can, the Stooges’ Funhouse, MC5’s High Time, Blue Cheer’s Insideoutside and Guru Guru’s self-titled 1973 lp. It’s an album that weds bludgeoning guitar riffs with philosophies from the Eastern world. Some have even gone as far to say that had Buddha formed a hard rock group, it would most likely resemble the music played by the Flower Travellin’ Band.

Funny notes aside, the band also has one foot firmly planted into the space rock era, meaning Satori will also appeal to listeners smitten by the sounds of Ash Ra Temple, Popol Vuh, Faust, Amon Duul and Embryo. Joe Yamanaka, the lead vocalist comes across as an underground Robert Plant, and by the time Satori Part 2 kicks in, your head will be blown off clean. This track has some of the deadliest eastern guitar riffs known to man and it’s held down by a heavy blues back beat. Yamanaka shouts, “There is no up or down” throughout this beautiful display of chaos. It’s really that good, and unlike anything I have heard before or since. Map begins softly but kicks in with some intense guitar playing and the kind of youthful vigor that’s only associated with teenagers.

Satori is the kind of record that unites punks, prog enthusiasts, metalheads and psych/garage fans. Its guitar playing is laced with eastern drones and Yamanaka’s strangulated vocals transcend the era, making Satori truly original and essential for any serious rock fan.
Written by Jason | October 4th, 2007

Thank you! Peace and love...