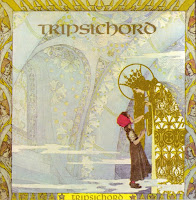 The Tripsichord Music Box was an American psychedelic rock group of the 1960s. They were managed by Matthew Katz, who also worked with Jefferson Airplane, Moby Grape and It's a Beautiful Day. Their loyalty to Katz, at a time when many San Francisco bands were signing recording deals with LA-based labels, may have contributed to their relatively unknown status today. Led by guitarist and singer/songwriter David Zandonatti, Tripsichord recorded a full length LP and several singles for Katz's San Francisco Sound label.
Circa 1966 Zandonatti joined The Ban whose members included Straight, McKinney and Guzman; The Ban had released a single on Brent Records before he joined them. They then signed to the
Embassy record label and their name was changed to the Now. Upon moving from Lompoc, California, to San Francisco they signed up to be managed by Matthew Katz who came up with the name Tripsichord Music Box and around this time Zandonatti became converted to the Mormon Church which became an influence on songs he wrote, some of which appeared on the band's LP. Tripsichord's other songwriter, Bill Carr, is Jewish and as Zandonatti was the only committed Mormon in the band they were never a "Mormon band".
Towards the end of their stay in San Francisco Ron McNeely joined as vocalist and, when Tripsichord Music Box folded, Zandonatti, Straight and McNeely moved to Utah and formed a band named Free Spirit. Straight left soon after leaving the Zandonatti and McNeely to get involved in the Sons of Mosiah, more of a troupe than a band.
Next, Zandonatti, Guzman, Dennis MacGregor and Danny Coletti formed Natty Bumppo who relocated to LA. Zandonatti stayed with them until 1981/82; he now lives in Oregon.

Their only LP release is a midpoint between the psych sounds of early Quicksilver Messenger Service and Moby Grape’s shorter, more concise material – psych influenced rural rock/folk rock with plenty of stoned ruminations and lots of melodic guitar work – the classic SF sound.  Regarding the Tripsichord album, Fuzz, Acid & Flower’s Clark Faville added, “their self-titled album (recorded in 1969) proves conclusively that they alone carried the torch during that year that was once shared by Quicksilver Messenger Service, Frumious Bandersnatch and Moby Grape. The Tripsichord album is essentially what the world was hoping Shady Grove would be! The record is an embarrassing wealth of riches both musically and in its dark and menacing lyrical imagery. The dual guitar interplay on this under-rated gem is as good as anything by the three groups mentioned and has stood the test of time well.”   If the album has a weak spot, it’s “Short Order Steward,” a boring blues jam that’s nearly rescued by fine guitar soloing.   The remaining cuts are excellent.  “Fly Baby” and “Black Door” are two of the better unknown SF psych cuts (Fly Baby features great tribal rhythms) while the album’s last cut, “Everlasting Joy,” lifts off with inspired guitar leads.  Other gems are the relaxed country rock of  “We Have Passed Away” and the mystical musings of “Narrow Gate.”  If you’re interested in hearing this unsung band’s music, the Akarma reissue is probably the best bet.  Besides including the album in its entirety, this disc also features the Fifth Pipe Dream tracks along with Tripsichord’s two 45s.  A very classy reissue with lots of great music.
___________________________________________

In the last gasp of San Francisco acid rock, Tripsichord Music Box recorded an album of cheery, hippie-vibed music that was already on the verge of becoming anachronistic upon its 1970 release. It isn't bad, and not too indulgent. It's just pretty derivative, with the characteristically angular S.F. guitar lines, folk-influenced harmonies, and lyrics hopefully anticipating a new order of sunshine and possibility. Sometimes they sound like a more pop-oriented Grateful Dead, and the influence of the Airplane is also evident; most of the vocals are male, but the presence of some female singing adds some color to the mix.