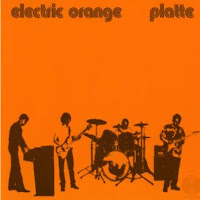 I don't know if the song titles have any sense. It doesn't matter - the main thing is to judge the musical output in the end. Here we have an album with some band jams mastered by Eroc at his 'ranch'. Originally released as a long player in 2003 - platte is a german expression for vinyl - the digitalized version from 2007 contains two bonus tracks. ELECTRIC ORANGE is delivering a special unique album - something I've never heard before. Either you love it or not. Fans of Hammond drenched music must be satisfied. But don't expect rock songs as usual. The basis of this album are hypnotic beats, pointed out monotonous with intention and the band members are spinning a fine web around them with their instruments.

kwark, nearly 20 trance minutes long, has a gloomy meandering begin. The song is absolutely Hammond infected but also with spacy guitars and raises in waves. holzbock with an impelling rhythm work remembers much at CAN. columb is my favourite - melancholic trippy with a floating beat because of the use of old drums. Probably suitable for a film music about camel riding across the Sahara - fantastic! Dedicated to mk with a swirling Hammond, caused by a Leslie I suppose, is recorded in memory of Michael Karoli from CAN who sadly died in 2001. This song was released on a Manikin Records sampler before. On flurstück something like a rhythm machine gives a minimalistic beat only accompanied by harmonium and flügel. The bonus tracks are rounding up the album with more variety.

Don't listen to this stuff only for one or two times - you will lose. The more I hear this the more I like it. Very creative album. References to the old kraut and psych times are intended but ELECTRIC ORANGE are delivering something new.

could not open both "electric orange" files with pass "deaf ears" ... is it correct? Would you please verify?