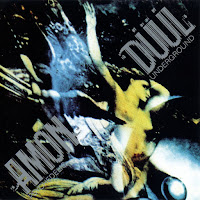 Psychedelic Underground is the debut psychedelic rock album by the German band Amon Düül. It was released in 1969.

AllMusic Review by Ned Raggett:
“Some albums just have the perfect name, and Amon Duul's debut nails that to a T. Obscure upon release and obscure even now, for all the cult appeal, Underground is music at its most experimental and relentlessly uncommercial, using late-'60s inspirations as a launching ground for what came to be described as Krautrock.
Psych-folk was another common term, one which applies just fine to much of the music here, feeling like an enthusiastic medieval festival gone just out of control enough, and with electricity to boot. Taken from a jam session from the previous year, but treated with many studio effects that enhance the strangeness of the collection, Underground rocks to its own weird beat. Opening track "Ein Wunderhubsches Madchen Traumt von Sandosa" captures what sounds like a great experience for everyone involved, a 17-minute composition heavy on the drums and percussion, with a basic, chugging guitar riff in one channel and chanting, call-and-response vocals located throughout the mix. At one point the jam is faded out in favor of piano parts, train noises, and the like, only to be brought back in again just as strongly, before finally fading into the gentler "Kaskados Minnelied," a mix of acoustic and electric guitars, along with a stringed instrument of some sort, that favors drones as much as it does soft riffs. The tracks on the second side have the same understandable vibe, but some are sparer in comparison, as with the keening strummed guitar/vocal combination "Im Garten Sandosa" and "Mama Duul und Ihre Sauerkrautband spielt auf," which is mostly clattering percussion in one stereo channel! You could say the sound quality isn't the best, but given the year of recording and the prevelance of lo-fi production approaches in more recent years, it doesn't sound that bad at all.”

For a lossless copy go here below:

Hi my friend,
Thanks a lot for this musical document on Amon Duul 2.
Regards and Thanks again
musicyoucan