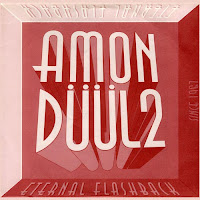 "Originally given away free to people who ordered enough other Amon Düül CDs
from the record label with material from 1969 to 1971
reworked by members of the group into one space rock epic."

This CD is a rare, Plunderphonics-style CD of Amon Düül II material given to people who ordered enough of Amon Düül II's CDs on the Captain Trip label. It is enclosed in a paper sleeve. Contains music from the 1969-1971 period. Rare and out of print.

Thank you
Please let me know if you chance upon a lossless rip.