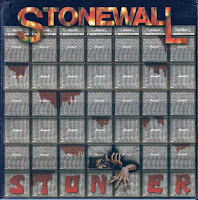 Stonewall was the house band of a recording studio owned by James (Jimmy) Goldstein, based in Long Island during the late '60s.

Goldstein was also a part-time member of the band, occasionally playing keyboards on their sessions. He was a performer of his own, using the stage name of "Jay James". Under that alias he recorded the album "Good Times And Bad Times" that was released on the Tiger Lily label (same as Stonewall).

Stonewall´s drummer Tony (Anthony) Assalti was the drummer on this rather weak country album by Goldstein. However, Assalti was never aware of the Stonewall album being released, and apparently became upset after learning about the Tiger Lily release in recent years. He still plays drums with drums, and is involved with the biker scene. He's not interested in the Stonewall recordings these days.

On the other hand, the guitar player Ray Dieneman was a good friend of Jimmy Goldstein. Dieneman was not aware of the Stonewall album until he saw a copy in Goldstein´s house in New York during a visit. Ray never owned a copy of the album, but was more amused than angry about the Tiger Lily release. It appears that Dienemann is the only band member to know about the Stonewall record being released at all.

According to Ray D, Stonewall broke up at the end of 1969, which would place the recordings heard on the album (which wasn't released until the mid-1970s) sometime in the late 1960s. The other two Stonewall band members -- vocalist Bruce Rapp and bass player Robert Demonte -- have not yet been tracked down.

Jimmy Goldstein who produced, engineered, and played keyboards on the Stonewall album passed away in 2009. The album was recorded at Jimmy Goldstein's Studio Tower Sound, in the Ed Sullivan building in NYC. According to Dieneman the band didn't record any other music on the album, so basically the entire LP on Tiger Lily is all of their music.