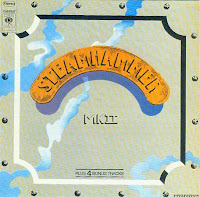 Easily Steamhammer's crowning achievment (certainly as far as progheads are concerned) ,
although many rockers will prefer Mountains. The main difference with this album and other Steamhammer albums is Steve Joliffe
who is not unknown to progheads since he went through Tangerine Dream , albeit on their controversial Cyclone ,
the only TD album to have acoustic instruments and yes! Vocals!!!!

Hardly controversial Mk II album, though as it is simply their most refined album ,

much thanks to the afore-mentioned Joliffe who playds KBs but also flutes and saxes.
Martin Pugh and Kerrian White make a solid duo on guitars but clearly the addition of KBs and winds is the difference.
Easily the highlight is the 16 min+ Travelling tune but also noteworthy are the bonus tracks
which are non-album rarities except for the single version of Junior's Wailing (present on their debut album).
A real classy album and a must for early 70's loving progheads.

4 stars Steamhammer's second album shows great evolution: their first album was rooted exclusively in blues. This album is more jazzy than the first, thanks to the addition of saxophonist/flutist Steve Joliffe. Mr. Hugues Chantraine got it right: prog-rock fans will probably enjoy this album and will find it more interesting than "Reflections" or "Mountains"; the compositions are more inventive, arrangements are more immaginative and the overall performance of the band is better. Highlights: "Supposed to be Free", "Contemporary Chick Con Song" (both are still bluesy, but more ambitious than other efforts), the short "Sunset Chase" (a beautiful acoustic guitar solo which reminds me Leslie West), "6/8 for Amiran" (with this unusual tempo structure), "Passing Through" (with his fake ending) and the wonderful "Another Travelling Tune". Highly recommended for anybody who ever thought how a prog-blues album would sound.
M. B. Zapelini | 4/5 | 2005-8-8
Studio Album, released in 1969

This is an album that I never tire of hearing. Although I have a tonne of downloads to listen to this is going to the top of the pile.
Thank you for this. Michael.