The Flock 1975 Inside Out (Sonic re.Creation vinyl) 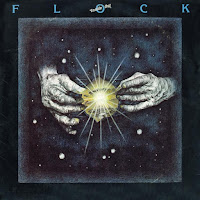 The music here is less jazz oriented than on their first two albums and there are some very good tracks in here. Still, jazz is very much present during the longest song from this album : "Back To You". It goes along with the poorest : "Hang On" which is a funky / soul song which is best avoided, believe me.

The best number out of this album is "Metamorphosis". Fantastic violin play from Mike and wonderful beat. If only they would have produced more of these. The closing part is simply gorgeous. Full of classicism. Vibrant, poignant, emotional : you name it. THE highlight of course.

Frank Pappalardi (from "Mountain") produced the album which was recorded during a short reunion. Unlike some purists (not on this site), I can't write that this album is bad. It holds several very good violin breaks, nice compositions ("My OK Today" is another one). The closing number is also very intense : powerful drumming, impressive keys and great bass play. Another highlight.

This is a good album after all. But there is no trace of this work on their official website as if the band would like to hide this release.
Review by ZowieZiggy
---------

4 stars First up is the name, it's FLOCK, as opposed to THE FLOCK, as the band changed their style of music from a horn laden ed jazzy/rock fusion to a prog rock/pop hybrid band. And what a change. The album cover says it all, a typical prog cover if ever there was. Six tracks (three tracks each side of the LP) of very good music; that can be played as a sort of background music, or turn the volume up music and give it a damn good listen to. My personal favourites are Back To You, and Metamorphosis from side one, and Hang On and My OK Today from side two.  I played my first copy till it wore out. And my feelings have not changed, it's so good to own it again. If ever you fall lucky and see this album, don't hesitate, buy it immediately.
Review by jonboy

A1. Music for Our Friends
A2. Back to You
A3. Metamorphosis

Labels: Flock The, The Flock