One of the most unrecognized jazz rock masterpiece! /---it was a masterpiece, quite hard to find---/ 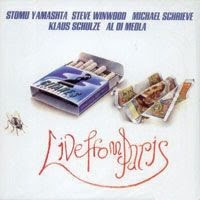 The music is hard to describe. A mix of smooth atmospheric, Jazz and Rock pages. Very enjoyable music, with cool and easily accessible jazz rock parts, but also with sometimes dark or weird ambiences. Superb production, nice sound with an equal part for each instrument, and a great singer in the person of Steve Winwood. So the question is : Why does this live album had been so wrongly forgotten? It is surprising, knowing that this super group brings together some famous musicians such as Klaus Schultze, Al Di Meola and Michael Shrieve. The fact is that Stomu Yamash'ta doesn't benefit from the same reknown. But considering this dashing effort it is a real shame. Try it out and I bet you will also wonder why!

Here we are having a supergroup on the stage in Paris. Very relaxed and inspired performance with a special mixture of styles from Soul (Steve Winwood) to Electronic (Klaus Schulze, Stomu Yamash'ta) and Fusion (Al DiMeola). Michael Shrieve, who also played with SANTANA, acts as the wellknown proficient and accentuated drummer. Remarkable are also the brilliant vocals exchanges of Winwood and Karen Friedman. It's a little bit tricky - only Friedman is pointed out for additional vocals but you can hear also some other female backing voices.

The band is presenting the studio album 'Go' live with nearly the same line-up, but extended, with more improvisations. The release consists of 6 longer tracks - some of them have jam character - which take turns with spacy electronic breaks and piano interludes. Don't know why but the chronological order of the songs has been changed (the same with the 'The Complete Go Sessions').

So correctly it starts with the electric intro Solitude and Winner Loser closes finally with the band introduction. The beginning of Nature is guided by a piano and further on the song developes wonderful atmospheric and melodic. Crossing the Line follows with excellent vocals. And not to forget the splendid guitar work by Al DiMeola.

Man of Leo is the longest track, grooving and against with DiMeola's intense soloing. Wind Spin is an instrumental jam pressed ahead with a funky/fusion bass and then fades into the uptempo Ghost Machine with a Jazz/Rock attitude. Time Is Here is midtempo, more soul/funk, especially highlighted by Karen Friedman's expressive interaction with Winwood. Winner Loser in the end is written by Winwood and remembers much at his times with TRAFFIC.

A great performance from this band which units some extraordinary musicians. Stomu Yamashta restrains himself to allow some other members to reap the fruits of their work. This release was later (2005) added to the compilation 'The Complete Go Sessions'.
(extrait from progarchives)

One of the masterpieces from the 70s. Have the double LP digitalized by myself with all the natural pops and scratchs from my old turntable. Thanks for sharing.