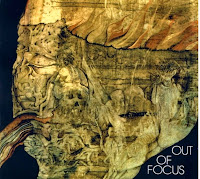 Out Of Focus biography
This awesome band came from Munich and made three extraordinary albums on the super-collectable Kuckuk label plus another that never got released until recently. Hennes Herring on KB (mainly Hammond organ), Remi Dreschler on guitars, Moran Neumuller on vocals and winds, Klaus Spöri and Stefan Wisheu on drums and bass respectively made an incredibly tight unit although they were prone to a lot of improvisation moments also. Their music is somewhat similar to early British prog but will gradually evolve to a certain jazz-rock while staying very politically and socially conscious (in the typical German style of those years) although the singing does not hold a big place in their music, their third release (a double) being mostly instrumental. They released three albums on the legendary Kuckuk label, the same one that also reissued them in Cd format.

After their third album, OOF suffered their first major line-up change with keyboardist Hennes Herring leaving the band to join SAHARA (another excellent group that will release two very solid albums), and he was replaced by yet another guitarist Wolfgang Gohringer (that made double guitar and double horn attack), but if it affected the group's sound a bit, it was nothing drastic either. A fourth (excellent) album was recorded in the spring of 74, but for some reasons it was never released - until Ultima Thule/Cosmic Egg would in 99. Sadly these events lead towards a slow decline of the group who would gradually slow down activities, recording just one more single and playing their last concerts in 78.

The musicians went their way, but in the mid-80's, three of them met and participated to Kontrast and recorded one of the best Krautrock album of that decade, according to the experts. This album and its intended suite just got a second life by getting a reissue, again on the Cosmic Egg label. Among the other posthumous releases is the left-overs from FLMA albums (Rat Roads) and a Live in Palerme 72, both excellent records appearing on the great Garden Of Delight Label.

Let me quote D-E Asbjornssen in Cosmic Dreams At Play and use his final comment about OOF: "what an awesome band they were" and I fully adhere to that opinion.

Highly recommended by Dag-Erik Asbjornsen in his great book Cosmic Dreams At Play, and by myself to every progheads infatuated with the early 70's way of making music. Simply awesome!

Review by apps79
Special Collaborator Neo Prog Team
3 stars Out of Focus were helped by a good promotion during 1970/71, ''See how a white Negro flies'' was included in Polydor's compilation ''Sounds '71'' and the track ''Blue Sunday morning'' became part of Kuckuck's ''SiebenSiebzig'' compilation.Six months after the release of ''Wake up!'' the Germans visited the Bavaria Studios in München to record a second album, which strangely carried the name of the group as a title.Kuckuck was again the publisher.

While ''Wake up!'' was a typical Kraut Rock album with psychedelic leftovers from the 60's, this one sees the band exploring the more experimental side of Rock music and this is pretty obvious already from the short openers ''What can a poor boy do'' and ''It's your life'', which are dominated by a collection of sounds and sights, containing inspirations from Folk, Blues and Jazz, characterized by frenetic rhythms, nervous sax solos, psychedelic organ runs and calm acoustic textures, not to mention the jazzy piano of the second piece.These work as a nice introduction to the very long ''Whispering'', which sounds like a rougher PASSPORT, featuring extended instrumental jams with a pounding rhythm section, usually overpowered by the furious electric guitar of Drechsler and Neumueller's powerful saxes, leading into experimental, jazzy improvisations and a couple of beautiful sax solos over the hypnotic bass lines of Wiesheu.''Blue Sunday morning'' is another attempt on Kraut Folk Rock by the band with a narcotic electric guitar playing alongside the archaic flutes, before Hering's organ gives life to a dramatic Heavy/Psych Rock cut.Not really fond of THE ROLLING STONES'-like vocals.The 17-min. ''Fly bird fly-Television program'' is more or less a good definition of Kraut Rock with strong psychedelic and Folk influences.Again the vocals are rather weak, but the music is pretty interesting with some great organ runs and sax interventions, Drechsler's guitar solos are absolutely efficient and the piece alternates between smooth and punchy segments with a fantastic ending section in the vein of early ELOY, characterized by tremendous energy and featuring Drechsler, Hering and Neumueller's active battle on individual solos.

Solid Kraut Rock with jazzy influences and nods to Folk Music.Passionate, efficient material, even if it lacks some great moments.Recommended.


For LOSSLESS go here below:

Labels: Out Of Focus