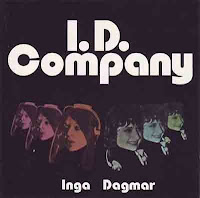 
It’s full of Eastern sounding Folk Rock, sitars and psych sounds (On the Inga tracks).
Electronics, Sitars, Eastern Rock Inga Rumpf and Dagmar Krasuse all mixed together to produce an experimental album.
And it has the Avant Garde emergence for Dagmar on the flip. ……………

Very interesting education around Inga Rumpf (this is I.) and Dagmar Krause (this is D.).
The ladies divided the disk among themselves, on the side for each, and these sides turned out very different, but both are interesting.
Inga presented the tracks of a meditative kraut sample with serious touches to oriental rhythms
(which is most noticeable in the first thing - Bhagavad Gita, but in others it also suffices).
Dagmar also presented the material in a completely different style:
the second side of the disc is the German psycho-avant-garde, where spontaneous saxophone screams are superimposed on the serene flutter of the flute,
Dagmar’s own sighs and whisperings, jazz rhythmic constructions of the drum set, bass drum, various gurgling, grunting and mumbling. In general, very cool…………
___________________

Split album between two soon-to-be well known female vocalists. Side 1 features Frumpy's Inga Rumpf and her masculine vocal style. The music is a combination of blues, jazz and Indian music - and sounds like some of the better moments of Krokodil's "An Invisible World Revealed". Dagmar Krause's side is considerably more experimental, foreshadowing her later work with Slapp Happy, Art Bears and Henry Cow amongst others. The music follows in a similar manner, and is clearly going for a free jazz sound. It's all a bit much to be honest, but fans of unhinged music + vocals will love it.