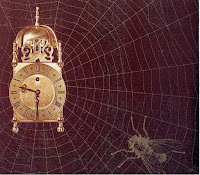 Formed in Cheltenham in 1971, 9:30 were a highly original band who took in folk and progressive influences in their work.

Released on the Ember label in 1972, “9:30 Fly” is legendary for the originality of the music within and also for its great rarity. Although the album failed to make a commercial impression at the time of its release, it is now regarded as a milestone in Progressive / Folk Rock.


Obscure short-lived UK band, evolving from Cheltenham and formed around husband Michael Wainwright (songwriting, vocals) and wife Barbara Wainwright (vocals, electric piano, just 18 years old at the time).
The rest of the band were Lyn Oakey on guitar, Gary Charman on bass and Mike Clark on drums.
They recorded one album for the Ember label with the sessions taking place at the Rockfield Studios in Monmouth,
Wales.Basically ''9:30 Fly'' (1972) is a soft Psychedelic/Folk Rock album, where some progressive shades are apparent in certain tracks.
The music is led by alternating male and female vocals, the psych-inclined rhythm section and the discreet use of electric piano, while the tracks are fairly accesible,
even if some decent instrumental lines are added in the process, mostly driven by Barbara's electric piano and a somewhat more edgy style in the electric guitar of Lyn Oakey.
There is some sort of pre-Annie Haslam Renaissance vibe throughout the record, both in the psychedelic and more Folk-colored numbers, as the band used dual vocals and acoustic guitars quite often.
'Mr. 509 appears to be a little more interesting being a fine Psychedelic Rock number with some jazzy tunes and occasional harder guitar moments and ''Time of war''
containing some acid instrumental parts in the beginning, before exploring again a pre-mature Psych/Folk ground akin to early Renaissance.
Barbara Wainwright is only credited with electric piano, but I certainly here some Mellotron in ''Brooklyn thoughts'', maybe the greatest piece on the album,
showered by emotional vocal arrangements, acoustic rhythms and the aforementioned, orchestral Mellotron strings.
The band served as an opening act for Velvet Undeground in Malver Winter Gardens at the fall of 1972, before fading in time.Lyn Oakey went on to play with John Cooper Clarke,
while drummer Mike Clark played with a group named The Outboys.